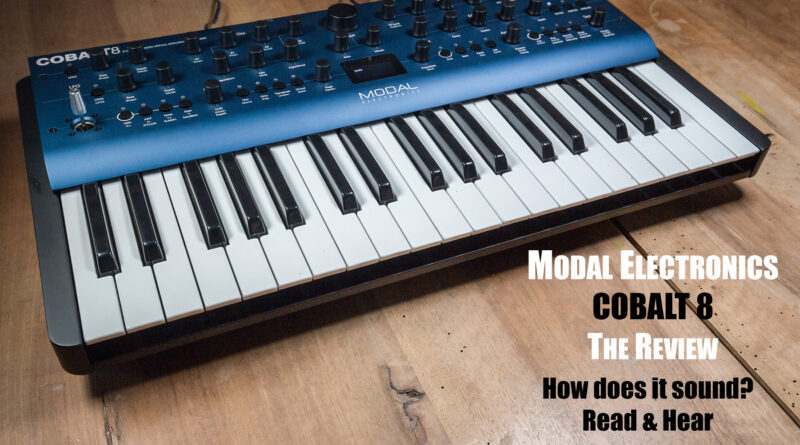 Aesthetically refined, well built and with a sound engine able to satisfy even the most demanding: here is the cheap synth that makes the giants of the sector tremble.

British soul, captivating design, careful construction and a sound engine capable of putting even the most experienced to the test. These are the main features of Modal Electronics Cobalt 8, virtual analog synthesizer capable of classic and legendary sounds but also of experimental and unusual timbres suitable for the most trendy electronic genres.

EVEN THE EYE WANTS ITS PART

Grabbed and removed from the box, what immediately strikes you about Cobalt 8 is its consistent weight, almost 6 kilograms: a pleasant feeling that restores strength and durability. Housed in a metal frame and with side panels in resistant plastic, Cobalt 8 stands out for its polished aluminum body with a refined design, studded with potentiometers and buttons and with a 1.54 inch OLED display in the center. The version sent to us for testing is the one with a 37-key Fatar TP/9S keyboard with velocity response and channel aftertouch. The instrument, however, is also available in a desktop-expander version (Cobalt-8M) and with a five-octave keyboard (Cobalt-8X).

The supply of connection terminations is more than good. In addition to the classic Left/Mono and Right audio outputs on ¼” jack sockets, the instrument has a dedicated headphone output, two pedal sockets (Sustain and Expression), two standard MIDI sockets on 5-pin DIN (IN and OUT) and a stereo Audio In socket on a 3.5”minijack.

In addition: two Sync-Out/Sync-In outputs on minijack and a USB port for connection to PC/Mac computers and Android and iOS devices. In this regard, the tool is supplied with a proprietary app and software (ModalApp) that allow remote programming via desktop and notebook computers, but also using tablets and smartphones. Furthermore, for PC/ Mac systems, ModalApp is available in VST3/AU formats for implementation in compatible hosts such as DAWs and soft–sequencers.

Polyphonic up to 8 voices, and up to 16 voices in Polychain Mode if connected via MIDI to another device of the same type, Cobalt 8 implements a synthesis chain based on 64 virtual-analog oscillators, up to 8 per voice, organized in 2 group-oscillator. Each macro-oscillator is equipped with traditional waveforms (sine, square, sawtooth, etc.) accompanied by 34 DSP algorithms capable of generating more complex and articulated waveforms, with the possibility of morphing between different profiles, filtered noise, bit–crushing and numerous other features designed specifically for analog emulation and the generation of soundscape and textures sounds. Downstream of the oscillators we find a 4-pole filter with Ladder architecture with the possibility of morphing and different configurations available.

Two 4-stage envelope generators (ADSR) and different profiles allow you to control the volume and filtering trend over time. A third envelope is dedicated to the modulation system. The latter consists of 3 LFOs, one common to all voices and two polyphonic ones, with oscillation capabilities in the audio band, and a 12-slot modulation matrix, 8 of which can be programmed by choosing between 12 sources and 55 destinations. Last but not least, the processing chain closes with three independent stereo effect units (FX1, FX2 and FX3) equipped with different algorithms: Chorus, Phaser, Flanger (Pos), Flanger (Neg), Tremolo, LoFi, Rotary, Stereo Delay, Ping-Pong Delay, X-Over Delay and Reverb.

Among the most interesting features of Cobalt 8 stand out the capability of programming patterns and sequences. In particular, the Modal’s instrument provides a programmable arpeggiator up to 32 steps flanked by a real-time polyphonic sequencer up to 512 notes, with 4 automations of parameters that can be recorded and edited by the user. In addition: a programmable polyphonic sequencer up to 64 steps, 8 notes per step and with 4 automations. Furthermore, 4 tracks for parameters automation and functions such as Sustain Latch, Chord Hold, Inversion and Transpose.

As for the timbral equipment, however, the instrument retains in memory up to 500 patches, all of which can be edited by the user; 300 of these are already programmed by Modal Electronics. Plus: 100 sequencer-presets and 100 Fx-presets. In short, just enough to have a good functional autonomy both in the studio and live, autonomy further enhanced by the possibility of remote control and instant recall offered by the supplied software.

The control surface of Cobalt 8 is particularly rich: 29 endless enconders, 24 buttons and a 4-axis joystick for managing modulations in real time. At the center of the panel, as we anticipated, there is a 1.54-inch OLED graphic display. Just above the screen, a set of three rotary controls allows you to manage the filtering: resonance (Reso), cutoff frequency (Curoff) and morphing of the cut profile (Morph). The oscillator control section consists of 7 encoders: four (A1/Tune-1, B1/Fine-1, A2/Tune-2 and B2/Fine-2) allow you to manage the pitch of the two macro-oscillators; with the remaining three, however, it is possible to select the synthesis algorithm of each oscillator (Algorithm-1 and Algorithm-2) and the mixing between the wave profiles (Mix/Glide). The envelope generators can be managed by three buttons that switch the action of the ADSR-controllers on volume (Amp-EG), filter (Filt-EG) and Modulation (Mod-EG), and by 5 encoders with which to drive the four stages of envelope (Attack, Decay, Sustain, Release) and the intensity of action of the latter (Depth).

How does Cobalt 8 sound? Really good! The sounds are full, mellow, vital and convincing, a result obtained thanks to a signal processing and finalization chain equipped with sophisticated and well-made algorithms, but also thanks to a well thought out and engineered hardware system, starting from the mechanics of the keyboard up to the electronics underlying the Digital-To-Analog conversion. The synthesis chain is sufficiently complex even for the most demanding sound designers, while the accompanying software is an added value that greatly facilitates the programming and creation of customized sound-libraries that can be recalled if necessary with a simple click. Excellent equipment of potentiometers and panel buttons, which allows you to indulge even live in impromptu and experimental performances. Last but not least in order of importance is the cost, about 650/700 euro: considering the build quality and the characteristics, Cobalt 8 offers a decidedly interesting quality/price ratio, which with an overall affordable cost allows you to equip your sonic arsenal with an effective instrument with infinite possibility.